Mama's coconut creme pie recipe is great for all your summertime cookouts!

Years ago, when my kids were small, we used to have a country restaurant nearby. The owners were friends of ours. They would visit the house from time to time and I would make pie and would would have it with coffee. One day they asked me if I would make the pies for the restaurant. I did and they were a hit for several years until they had to close the business because they were widening the road. This pie was the most requested. 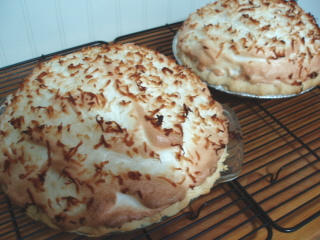 Directions for the crust:

In a small bowl, mix together the flour and salt. Cut the butter into the flour until it resembles coarse crumbs. Add just enough cold water (1 tablespoon at a time) until the flour mixture forms a ball.

Place on a lightly floured surface and using your hands, slightly flatten the pastry ball. Using a rolling pin, roll the dough out from the center into a 12 inch circle.

Wrap the pastry circle around the rolling pin and unroll pastry into a 9 inch pie pan. Anything that is hanging over the edge of the pie pan you will want to fold under the crust and then crimp the edges.

OR you can use a store bought pie crust for the coconut cream pie recipe.

Whether you use this homemade crust of a store bought crust, you will need to use a fork to make wholes in the pie crust before you bake it so that it will not bubble up. Bake for 6 to 8 minutes.

Mix sugar, cornstarch and salt in a 1 1/2 quart saucepan. Stir in the milk gradually. Cook over medium heat, stirring constantly, until mixture thickens and boils. Boil and stir for 1 minute. Stir at least half of the hot mixture gradually into the egg yolks. Pour back into the hot mixture in the saucepan. Boil and stir 1 minute. Remove from heat, add butter and vanilla. Pour into pie shell.

For the Meringue Topping:
Allow egg whites to stand at room temperature for 30 minutes. In a large mixing bowl combine the egg whites, vanilla, and cream of tartar. Beat with an electric mixer until soft peaks form (about 1 minute).

Gradually add the sugar while beating on high speed until stiff glossy peaks form (about 5 minutes).

Immediately spread on top of hot pie filling. Spread the meringue all the way to the crust to seal it so that it doesn't shrink during baking. Sprinkle the 1/4 cup of coconut on top.

Bake pie on 450 degrees F for about 5 minutes until lightly browned. WATCH THE PIE CAREFULLY BECAUSE IT DOESN'T TAKE LONG TO GO FROM BEAUTIFULLY BROWNED TO BURNED!

Have your say about what you just read! Leave me a comment in the box below.
[?]Subscribe To This Site