Nothing says comfort more than a crock pot cooking a big 'ol pot of beef stew on a cold winters day.

But don't just save your crock pot for wintertime, use it year round. In the summertime, you'll save energy and keep your kitchen cooler than it would be if you used your stove or oven.

So dig that old crock pot out, follow these helpful tips and let's do some crock pot cooking!

Here are some tips for using your crock pot:

* Don’t put anything frozen in the cooker unless a recipe calls for it.

* Fill cooker no less than half full and no more than two-thirds full.

* For all-day cooking or for less-tender cuts of meat, use the low setting.

* If whatever you're making is too juicy, remove the lid and turn it on high for the last hour of cooking.

* Slow cooker liners are a great time saver when it comes to cleanup.

* If using whole cuts of meat, rub the meat down hard with spices before you put it in the crock pot.

* Veggies don’t need to cook as long as meat so wait until later to add them to the crockpot to keep them from getting mushy.

At $149 it's a little pricier than most but according to the America's Test Kitchen website, "This cooker aced the evaporation test and all the cooking tests, and it has every feature we want, including insert handles and a clear lid. Provided a steady, slow heat that is ideal for breaking down the collagen in tough cuts of meat without overcooking them."

Now if you don't want to spend that much money or you just want something inexpensive, the

is a pretty good crockpot.

So dust off that slow cooker start enjoying it with some of these great Crock Pot Recipes from Mama:

Awhile back I found this little gem, "470 Crock Pot Recipes" for Just $1. I've tried a few of them and the ones I tried were pretty good! 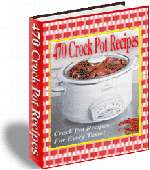 Here are some of the crock pot cooking recipes in this ebook:

Have your say about what you just read! Leave me a comment in the box below.
[?]Subscribe To This Site